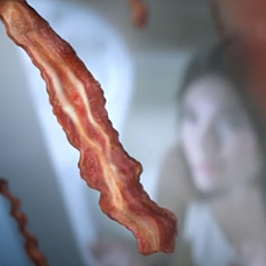 Scientists in China have genetically engineered a new kind of pig that has almost 25 percent less body fat than your average porker. The researchers say their technique could help pigs stay warmer, grow faster and healthier, which would reduce costs for breeders.

That’s great.  But, what’s it going to do to pork chops or bacon?  Or pork rinds?

Well, fortunately, pork rinds are the roasted skin of the pig.  So, does that mean you can roast a football and eat it?

I sometimes frighten myself with the questions I come up with.

Anyway, Chinese scientists may have just successfully proven that they can engineer a skinnier pig than nature, but meat lovers probably won’t be frying up the lean bacon anytime soon.

These piggies are probably not coming to market.

Most experts say they doubt that the genetically modified pigs will ever come to the USA.  FDA would probably never approve and most Americans would steer clear of genetically-altered bacon.  I know I would.

Categories: Animals, Local News, Original Features, Weird News
Comments
Leave A Comment
The Carden Circus Performs In San Angelo Wed, Nov 16th!
When Your Horse’s Shoes Have to Be As Purebred As They Are
What Can Happen If Your Dog Kills In Texas..Delivery Driver Mauled
San Angelo’s Cinch Roping Fiesta is Oct 27th – 30th
U.S. 87, ET Highway? Roswell Has Nothing On San Angelo
Is This Texas Mom Boycotting a Disney Movie Sequel Because of…Satan?
Texas Has A Lot of Weird Laws Regarding Skunks
Has Texas Ever Seen Anything as Horrifying as These Zombie Snails?
Can an Alligator Be a Legit Emotional Support Animal?